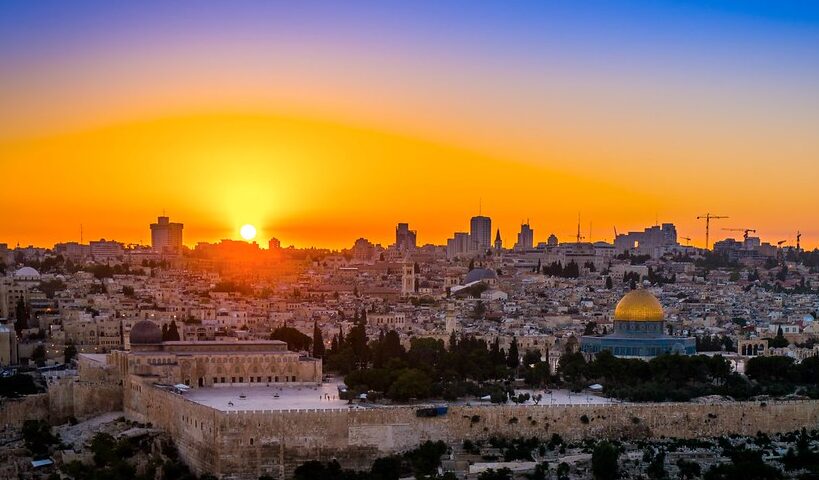 Ahron Notis, The Great Z’manim Debate: The History, the Science, and the Lomdus (Mosaic Press, 2022), 205 pages
Reviewed by Tom Rosenfeld 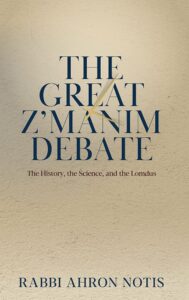 Despite my own background in astronomy and the Jewish calendar, I have long been puzzled by some of the many halakhic positions for calculating tzet ha-kokhavim (literally “stars out,” i.e., nightfall), the halakhic definition for when the next calendrical day begins in certainty. The concept of tzet ha-kokhavim has many applications, but the one that we are most familiar with is to determine when Shabbat ends. Customs in different communities for this purpose vary widely: from 18, to 30, 42, 50, 72, or even 90 minutes after sunset.

In The Great Z’manim Debate, Rabbi Ahron Notis sets out to clarify the basis of these debates by starting with the original Talmudic sources and their foundation in astronomy. He reviews the basic astronomical phenomena that pertain to the question, and then attempts to show the fallacy of particular positions that are based on an erroneous cosmological model. Having demonstrated how astronomical facts unknown to previous generations shed light on the halakhic response, the author then explains how a unified and precise solution to the question of when nightfall begins becomes practicable.

The book targets laypeople who are familiar with the traditional halakhic sources (such as the Talmud and main works of the Rishonim and Aharonim) but who lack a background in astronomy. As the final word in the subtitle (The History, the Science, and the Lomdus) indicates, the book is peppered with “yeshivish terms” that the reader is assumed to know. The glossary significantly and usefully defines many astronomical terms but none of the yeshivish words, such as my personal favorite, “shlugged.”

[View the table of contents and sample chapter 1, “Tekufos”]

The book starts out by delving into the astronomical models used by the ancient Greeks and Hazal. According to a beraita, the Jewish Sages believed that at night, the sun traveled above an opaque rakia (firmament), thus causing darkness, whereas the Greek scholars believed that the sun traveled below the horizon at night (Pesahim 94a). The beraita concludes with a statement by Rebbe: “Their words appear more correct than ours” – an admission that the initial model of Hazal was scientifically incorrect.

Notis then explains how this debate about cosmological models of sunset is at the root of the disagreement between the Geonim and Rabbenu Tam regarding the question of whether to wait 18 or 72 minutes after sunset for nightfall. Although Notis concludes that Rabbenu Tam’s arguments for a late nightfall (72 minutes following sunset) can be discounted because they are based on an incorrect understanding of astronomy, he notes that Rabbenu Tam, like other Rishonim in Ashkenaz, did not have access to the classic books of Greek science. Furthermore, he points out the scientific knowledge and courage of Aharonim like the Vilna Gaon, Lavush, and the Ba’al HaTanya in stating that Rabbenu Tam’s arguments did not align with scientific reality. As the Vilna Gaon stated: “To the extent that a person lacks knowledge of science, he will also lack one hundred measures of the wisdom of Torah, since Torah and science are bound up together.”

Rabbi Notis studied at the Brisk Yeshiva in Jerusalem and the Bais Medrash Govoah of Lakewood, has been an instructor in yeshivot and as a Rosh Kollel, has authored works of more classical lomdus, and works as a researcher ArtScroll Publications. Perhaps because of this pedigree we should be even more impressed with his willingness to embrace scientific inquiry and worldly wisdom in the service of halakhic observance, even when that calls into question practices of former generations. For example, he draws our attention to the halakhic timetables (luhot), used today throughout the Jewish world for Shabbat in/out times (perhaps one hangs on your own fridge?). Generally, these times are no longer formulated by adding a fixed number of minutes to sunset as was once the case. He explains (as per the Vilna Gaon and others) that the fixed number of minutes we find for tzet among Rishonim were referring to the latitude of Israel or Babylonia in a particular season. Since the length of time from sunset to darkness (bein ha-shemashot) depends on location (specifically, the line of latitude) and the season, we need to modify these times for other cities and dates. Thus, our timetables utilize standard astronomical calculations to determine these values for all the days of the year.

Height of the sun at solar noon (from: The Great Z’manim Debate)

The author’s explanation of how the ancient Greeks and Hazal understood astronomy, especially where their understandings differed from one another, will help people unfamiliar with that topic. He also clarifies the often baffling details of the halakhic process, such as the foundations of the positions being debated, why there is such a wide range of proposed times for nightfall, and how these topics are related to the respective cosmological models of the Greeks and Hazal.

The book sometimes lapses into unnecessarily detailed discussions of the ancient Greek astronomical model, instead of simply referring to modern astronomical facts.

For example, he relates to apparent historical questions of how the Greek model could account for both the Sun’s daily movement from east to west, while simultaneously making a yearly orbit from west to east (24). Regardless of the solution given by the Greek model (which is not well represented by Notis) he could have simply explained how this works in fact – the “metzius,” as Notis likes to say. More troubling are the occasional inaccuracies, such as when Notis blurs the lines between astronomy with astrology, saying that the zodiac was useful for “practical things, such as . . . foretelling the future”(62). In addition, the useful diagrams in the astronomical section of the book are left unnumbered, so readers cannot benefit from easily cross-referencing them with the discussion in the text. A tangential chapter, “The Wisdom of Yissachar,” contains anecdotes about some famous Jewish astronomers such as Abraham Zacuto (14-15 c.), whose work was a valuable aid to Columbus and de Gama, and Ralbag, inventor of “Jacob’s staff,” an important navigational instrument. Despite their uncertain—indeed, largely apocryphal—origins, these stories may entertain some readers while distracting others.

The Talmud praises science, maintaining that those who are capable of studying it and do not do so “are making themselves blind to God’s handiwork” (Shabbat 75a). With this in mind, Rabbi Notis’ attempt to educate and elucidate modern readers concerned with Jewish observance to the science and astronomy underlying hilkhot zemanei ha-yom should be celebrated.

Known as AstroTom to his friends, Tom Rosenfeld is a Computer Cloud Architect by day and peers above the clouds at night. He posts infrequently to http://astrowife.blogspot.com

Alt+SHIFT: Tales Out of School

Alt+SHIFT: Tales Out of School