Summary: Leonard Cohen, the award-winning Canadian Jewish singer-songwriter, poet, and novelist, died at the age of 82 on November 7, 2016. In his illustrious and celebrated career spanning five decades, he released 14 studio albums, published 17 collections of poems and two novels, and received more than 40 awards, including the Grammy Lifetime Achievement Award in 2010. Described as “without question, one of the most important and influential songwriters of our time” at his 2008 induction into the Rock and Roll Hall of Fame, and in the Rolling Stone magazine obituary as “the dark eminence among a small pantheon of extremely influential singer-songwriters to emerge in the Sixties and early Seventies. Only Bob Dylan exerted a more profound influence upon his generation.”

Listening to his haunting bass voice crooning his deeply evocative lyrics, he was a poet-philosopher as much as a singer-songwriter. He liked to describe his songs as “investigations” into the hidden mechanics of love, sex, war, religion and death – the beautiful and terrifying truths of existence. Folk singer Judy Collins once summarized his work as “songs for the spirit when our spirits were strained to the breaking point,” surely an argument for why Cohen’s work remains valid and relevant to this day. 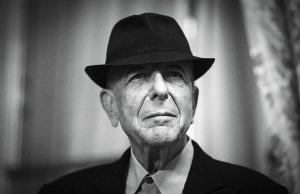 Why this is The BEST: Rabbi Jonathan Sacks had a deep appreciation for music of all kinds, and was equally comfortable extolling the virtues of Beethoven and Brahms, hazzanut and a Hassidic nigun, and the Beatles and Eminem. This became clear from his early appearance on the BBC’s Desert Island Discs in 1991 and the recent interview promoting his book Morality, in The Financial Times from April 2020, where music was a recurring theme. In this interview, one of the last he gave before his untimely death just a few months later, he describes his passion for music, how music was his connection with his father, and how critical music is for Judaism. But for R. Sacks, music was first and foremost a source for spirituality, “the language of the soul.”

On November 18, 2016, days after the death of Leonard Cohen, sitting in his New York hotel room, no doubt preparing a sermon on the coming week’s portion, Vayera, R. Sacks experienced a moment of inspiration that he couldn’t help but share in an unscripted and unplanned video. In it, he linked the beauty and power of Cohen’s last song You Want It Darker, the weekly sedra, and the fractured world of the post-2016 U.S. election and the Brexit vote.

A self-professed fan, R. Sacks has quoted Leonard Cohen songs often. But in this 11-minute video, he delves into an unprecedented depth of analysis of both this particular song (its personal message and the broader message to our generation), and of Cohen as a deeply Jewish artist. It is a magnificent example of R. Sacks finding religious meaning and inspiration everywhere he looked, and his openness to appreciating and respecting Jews and people of all backgrounds, finding religious truth and beauty in their work and in their lives.

The song contains an English translation of parts of Kaddish (R. Sacks suggests Cohen knew he was nearing the end of his life, and was reciting Kaddish for himself). The Hebrew word hineni (“here I am”) appears three times in the song, followed by the English words “I am ready my Lord,” an obvious reference to the biblical phrase used to denote a willingness for sacrifice. This phrase features three times in the Akeda narrative in Vayera (see Genesis 22). R. Sacks saw significant connections between the song, the Akeda, and the existence of violence in the name of God. He notes the angst and anger in the lyrics, summarizing his analysis with this paraphrasing: “God, I love You, but I don’t love the world You created or the human beings You have made in Your image.”

Despite Leonard Cohen’s obvious struggles with his faith, and his experimentation with other religious experiences, he was always deeply and proudly Jewish, and R. Sacks celebrated him for this. Cohen famously came to Israel during the 1973 Yom Kippur War to entertain IDF troops, and his many performances in Israel would be peppered with Hebrew and references to Jewish liturgy. For example, he concluded a 2009 concert in Ramat Gan with Birkat Kohanim (he was proud of his priestly heritage). References to Jewish ideas are found in many of his songs, such as Unetana Tokef in Who By Fire, and according to R. Sacks his most famous lyric, “There is a crack in everything, that’s how the light gets in,” is a reference to the Kabbalistic doctrine of Shevirat HaKelim. But in his most “Sacksian” lyric, perhaps underpinning a deeply Jewish theme running throughout his art, Cohen sings in Hallelujah:

Almost exactly four years after he recorded this video, R. Sacks passed away on Shabbat Parashat Vayera, leaving us the challenge – to find light in the midst of darkness, life in the midst of death, with words of praise of God on our lips.

Daniel Rose is educational consultant and content developer for the Office of Rabbi Sacks, and a lecturer at the London School of Jewish Studies.

The BEST: A Secular Age

The BEST: Long Walk to Freedom

The BEST: Talking to Strangers

The Song of the Well