The BEST: The Oxbow 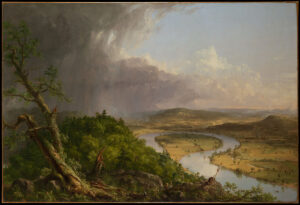 Summary: “View from Mount Holyoke, Northampton, Massachusetts, after a Thunderstorm” (1836), more commonly known as “The Oxbow,” is an early American landscape by Thomas Cole. Cole was a British ex-pat who is often regarded as the founder of the Hudson River School of landscape painters. Today, the painting hangs in the Metropolitan Museum of Art.

“The Oxbow” is a study in contrasts. It juxtaposes calm, orderly farmland with wild, unruly forest. In half the painting, the sun shines amidst a clearing; in the other half, a thunderstorm darkens the landscape. The artist himself is visible in a tiny self-portrait in the foreground.

Why this is The BEST: “The Oxbow” represents two competing truths: that our actions determine our lives’ direction, and that God alone controls the world. On some level, these concepts are mutually exclusive; reconciling these ideas is perhaps one of a Jew’s most difficult tasks.

The right side of the painting, which to a contemporary of Cole’s would have represented the eastern United States, is carefully cultivated farmland and smooth, rolling hills. The sky is calm, the clouds are retreating, and the flat gray-blue water reflects a peaceful sky. Even the trees are orderly.

On the left, representing the American West, the landscape is untouched by human interference. The trees are tall, unruly; the vegetation overgrown. The sky is still dark from the receding thunderstorm. Not only is the landscape untamed; it is frightening.

That our decisions guide our lives is fundamental to our daily existence. We work towards goals large and small, and when we are successful, we often instinctively credit our own human endeavor or hishtadlut. Left unchecked, however, this worldview is bound to fail given mankind’s imperfect nature; our inevitable failures after applying best efforts would be crushing in the absence of emuna.

On the other hand, the unmitigated belief that God has dominion over the world can paradoxically remove our motivation to improve ourselves, as well as encourage reckless behavior. It frees us from the burden of our decisions and our mistakes, because after all, nothing is truly within our control.

In “The Oxbow,” Cole invites the viewer to visualize a world that reconciles these opposing viewpoints in two powerful ways. 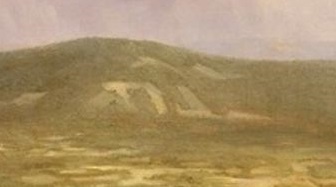 First, in the guise of logging scars across the background hillside, he places the word “Noah” (נח) in Hebrew letters. If read upside down, from the vantage point of Heaven, the letters spell out “Shaddai” or “Almighty.” Cole was a religious man who routinely drew inspiration from the Bible and believed that all language originated from Hebrew. The story of Noah fascinated Cole, who depicted it in several paintings during his career. This reference in “The Oxbow” to God’s decision to wipe out the world and flood it to the mountaintops, and His subsequent decision to allow Noah to repopulate the earth because he was a “tzaddik in his generation,” speaks to the possibility of obtaining a better outcome through our character and our behavior. Although God was ready to turn His back on His creations, Noach was able to save himself and his family, and ultimately the human race, because of his behavior. According to Rambam, a tzaddik is someone whose merits, or good deeds, outweigh his sins. Simply put, our behavior matters. Cole’s reference to the biblical Flood – and the man who survived it, giving humanity a second chance – is a stark reminder that we can influence our outcomes through living a principled life and adhering to God’s word.

Detail: Cole enters his own painting (click to enlarge)

Additionally, the artist positions himself in the foreground, among the ruined trees and under the still-dark sky, rather than on the side of the painting depicting land that has been completely altered through man’s efforts. Moreover, the artist’s expression is deeply satisfied, despite his placement in the stormy portion of his world. Cole’s Romantic sensibilities are evident from his self-portrait, which marries the spiritual to the sublime. The inherent critique of industrialization as the destruction of God’s landscape is depicted through Cole’s intentional identification with the unimproved, wild land on the left side of the painting. His self-portrait demonstrates the necessary coexistence of the forest (representing trust and bitahon) and the subdued, cultivated landscape (representing hishtadlut).

Although we may dwell in an unpredictable world that can seem to lack order, ultimately even the storm comes from God, and He can bring us through it. The beauty of “The Oxbow” is that it allows us to envision a world that can be shaped through our actions, which is simultaneously—and necessarily—a world that we do not fully control.

Emma Horowitz is an English and Communications teacher at Ma’ayanot Yeshiva High School for Girls. Click here to read about “The BEST” and to see the index of all columns in this series.

The BEST: Grace Before Meat

The BEST: The Wealth of Nations

The BEST: When I Was a Child I Read Books

The BEST: Grace Before Meat

The BEST: The Wealth of Nations