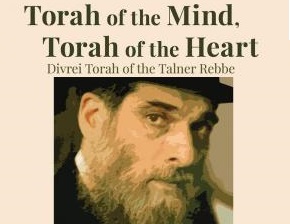 Since his passing over twenty years ago, the absence of Rav Professor Yitzhak (Isadore) Twerky zt”l has been sorely felt by those who learned his Torah, studied his scholarship, and saw in him a model of spiritual engagement integrated with intellectual rigor.

We are now gratefully in the debt of R. Twersky’s disciple, Rabbi David Shapiro, who has published the first volume of Torah of the Mind, Torah of the Heart: Divrei Torah of the Talner Rebbe on Bereshit and Shemot (Urim Publications), which records a sampling of R. Twersky’s teachings in the Talner Beis Midrash where he served as the Admor (the only Harvard Professor ever to lay claim to such a position outside the Ivory Tower). The short essays in the book, arranged according to the weekly portion, focus on religious-philosophical themes. Central among these are: the need for humility and inwardness, avoiding routinization in religious life, developing sensitivity to God’s role in our daily encounters, and the centrality of kedusha and our responsibility to generate it within society.

We are grateful to Rabbi Shapiro and Urim Publications for allowing us to share an adapted sample from the newly published book on this week’s parasha.

Yosef harnessed his chariot, and ascended to Goshen to meet Yisra’el, his father; he appeared to him, fell upon his neck, and cried on his neck for a long time (Genesis 46:29).

Rashi: But Ya’akov did not fall upon Yosef’s neck, nor did he kiss him. Hazal say that he (Ya’akov) was reciting Shema.

R. Chaim Brisker disagreed. He explained as follows: Ya’akov Avinu, having been commanded to travel to Egypt, had been – throughout his trip – occupied with God’s command and thus exempt from other mitzvot. Having now arrived in Egypt, however, he became obligated anew in the mitzva of reciting Shema, and fulfilled it immediately.

A third approach is that of Netziv, in his Ha’amek Davar:

Yosef was pre-occupied with the dream of the sun bowing to him; it represented his father … It therefore occurred to him to meet his father while dressed in royal garb … and his father would bow to him out of respect for the monarchy … in this manner the dream would be realized … His father had a grievance against him. For, although Ya’akov anticipated [fulfillment of] the dream …he never thought it would come to fruition by Yosef himself causing his father to be demeaned. Therefore, what did he do to immediately turn his mind away [from his grievance]? He recited Shema with intense devotion and love of God – for this has the power to turn one’s mind away from all mundane matters.

The moral according to the Netziv: a person is accountable for his actions even when he is attempting to implement a providential scheme.

Rabbi Twersky’s TRADITION articles can be read in our archive. Purchase Torah of the Mind, Torah of the Heart from Urim Publications.